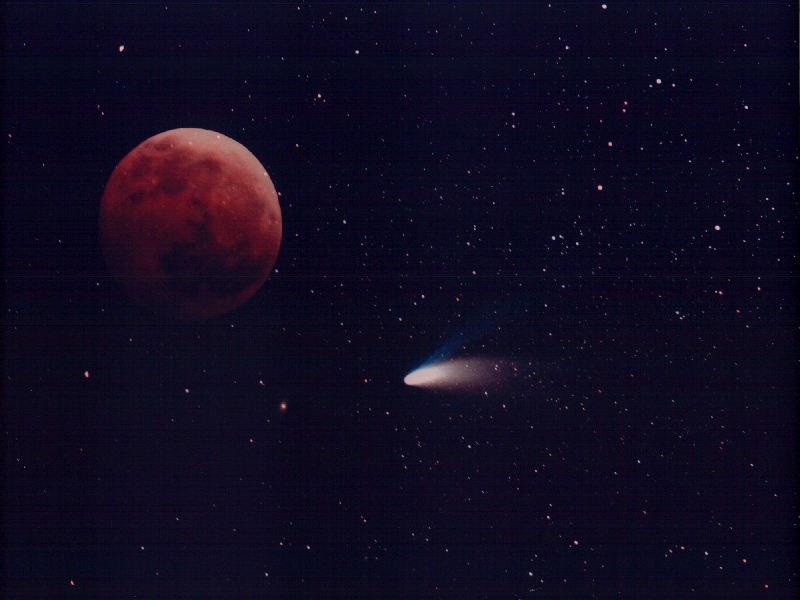 This composite photo overlays the fully eclipsed moon (not to scale) above M31 and the comet.  It gives an idea of the magic of that night with Hale-Bopp arched over the northern sky and the very dark total eclipse.  The comet was pointed directly at M31.  It was about 20 below C with a brisk wind blowing from the west.  My 10 year old son and I were alternately huddled in the car trying to warm up and out in the cold turning the knob on the barndoor a quarter turn every 15 seconds.

April 5th, 120 second exposure with a 50mm f1.8 lens. This was taken about 30 minutes past midnight. The northern lights had started to glow about midnight and they had some red fringes visable to the naked eye. This film is seems to be very sensitive in the red end of the spectrum.

April 9th, 11:30 pm. 180-sec with f1.4 lens at 50mm. This is the day that the news networks said that there was going to be a great display of northern lights because of the solar flare a few days earlier. I was still waiting a few hours later but the show didn’t start for another 24 hours.

240 sec exposure through f1.4 lens set at 35mm. As in all of the above I’m guiding with a homemade barn-door mount. This would have been taken about 2:00am on the morning of the 10th. The glow to the right of the picture is the town of Fort St. James about 40 miles to the north. The skies were dark with a slightly muddy horizon. The tempature was well below freezing and there was moderate wind blowing from the north. The comets’ tail could be traced all the way into Cassiopeia with the naked eye.

This is a shot taken through a friends f4.0, 600mm lens piggy-backed on top of a motor driven Dynamax 8 telescope. Same film, about a 240″ exposure. Most of these have had one pass with a unsharp mask and a bit of gamma correction. I also have some images taken at prime focus with an 8″ Schmidt-Cassegrain over a range of dates that show some good detail of the nucleus.